He hath founded it upon the seas
Saturday, Sep 19, 2020
A world within. A state apart.
Caymans
Business
Tourism
Sport
World
Tech
Lifestyle
UK
Add Your News

What do we know about the Russian vaccine

Study findings on the Russian vaccine against Covid-19 show that it is safe, well tolerated and induces cellular immune responses in 100% of healthy participants.

This was published by The Lancet magazine, based on a preliminary study carried out by researchers from the Russian government. This study was evaluated by a rereading committee of the British medical journal prior to its publication.

All reported adverse events on the Russian vaccine were mostly mild. However, a comparative clinical study with other vaccines is needed to confirm these findings, the publication notes.

The information is released after the Russian authorities announced, last August, their vaccine against Covid-19, which they call Sputnik V, in honor of the first satellite launched into space, in 1957.

On August 11, it was reported that Sputnik V was entering the third and final phase of clinical trials.

It should be explained that adenoviruses are a group of viruses that typically cause respiratory diseases, such as colds, conjunctivitis (eye infection), bronchiolitis, pneumonia, among others. Both components were developed, manufactured and stored by the National Research Center for Epidemiology and Microbiology NF Gamaleya (Moscow).

During vaccination, component 1 is introduced for the first time and, after three weeks, component 2. According to the evaluation of the developer, the immunity can last up to two years. Then you may need to vaccinate again. However, this remains to be explored in post-marketing studies, explained Vadim Tarasov, director of the Institute of Transmission Medicine and Biotechnology and head of the department of pharmacology at Ivan Sechenov University.

How were the studies done?

It was precisely at the Ivan Sechenov University that preclinical trials of two dosage forms of the Russian vaccine were carried out. The other place where the studies took place was at Burdenko Hospital.

Healthy adult volunteers (men and women), whose ages ranged from 18 to 60 years old, were enrolled for the Russian vaccine studies. Between June 18 and August 3, 2020, they enrolled 76 participants in the two studies Thus, in each study, 38 volunteers were vaccinated. More men than women participated in the study.

According to Tarasov, the study itself was carried out in two stages. One of them was the observation of volunteers for 14 days in isolation to prevent them from contracting the coronavirus infection. Once the observation was completed and it was confirmed that the volunteers did not have Covid-19, they were transported, with all possible precautions, to the cardioangiology center of the Ivan Sechenov University.

In this hospital, 38 volunteers stayed 28 days after the first injection of the drug and were discharged one week after the second. Their stay in the hospital was organized to protect them from the possibility of becoming infected and thus dropping out of the study or entering incorrect data on the immunity developed, he explained.

It was extremely important work, to reliably assess the response of the immune system and draw preliminary conclusions about the effectiveness of the drug, says Sechenov.

According to the study published in The Lancet, the most common reactions among participants were pain at the injection site, hyperthermia (body temperature 37–38 ° C), headache, fatigue, and muscle and joint pain. No serious adverse events were reported during the investigation.

Notably, the volunteers had no infectious diseases at the time of vaccination and for 14 days prior to vaccination, and did not receive any other vaccines within 30 days of participating in the study.

When the world announcement of Sputnik V was made, it was greeted with skepticism by many researchers by the scientific community. Its efficacy and safety were questioned, mainly due to the absence of public data on the trials conducted up to that point.

This opinion is largely due to misunderstanding that the preparation in question is registered in the Russian Federation 'conditionally', says Sechenov. As he explains, this is a well-known and widely used mechanism in the United States, the European Union, Japan and other countries with a developed regulatory system. Its essence lies in the fact that if it is necessary to put the drug into practice as soon as possible, for example, for orphan or oncological diseases, during epidemics, etc., and it is impossible to conduct full clinical trials, the drug is temporarily registered with indications of limited use, which are based on the results of clinical trials already carried out, he details.

At the same time, a mandatory requirement is to conduct post-registration studies with the participation of a certain number of patients at a given time, and any use of the drug becomes part of the study.

This is the case of the Sputnik V vaccine, whose registration certificate was issued until January 2021, and as a prerequisite, clinical trials with 40,000 participants were established, says Sechenov.

As has been announced, this will be the objective of the phase 3 trial (which will include 40,000 participants), of various ages and with different risk levels.

Since the announcement made by President Vladimir Putin last August, the World Health Organization (WHO) has urged Russia to follow the established protocol and comply with all the phases necessary to develop a safe vaccine.

The WHO will not endorse a vaccine against the coronavirus if it is not safe and effective, declared this Friday, September 4, its director general, Tedros Adhanom Ghebreyesus.

According to the WHO, there are 176 vaccine projects underway in the world, of which 34 are in the clinical trial phase, which means that they have started to be tested in humans. Among these, eight are in phase three, the most advanced.

Around the world, the pandemic has claimed so far the lives of more than 875,700 people and infected more than 26.6 million. 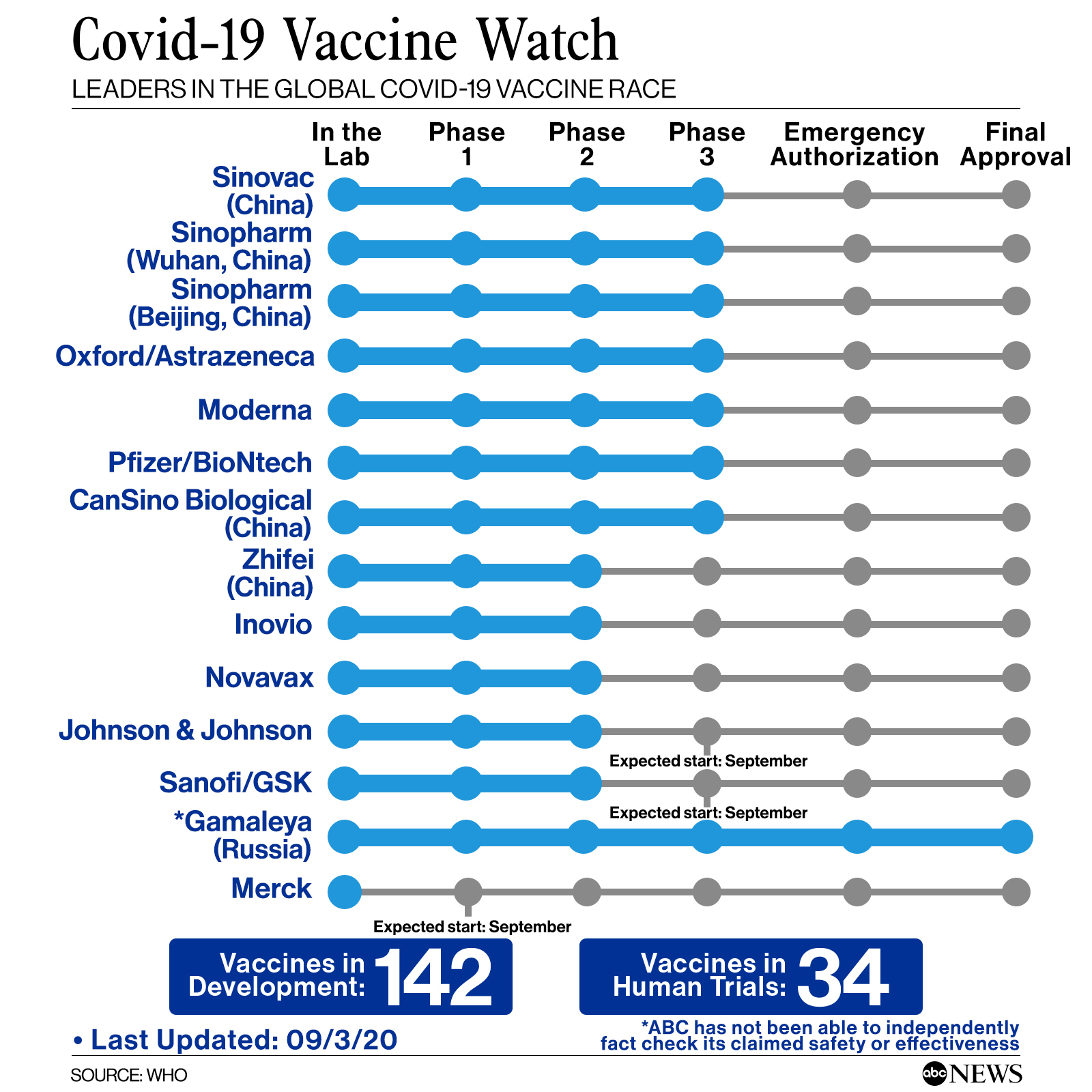 Poll: Majority would vote before election day in the US

Most of President Donald Trump's supporters plan to cast their vote on Election Day, while about half of Democratic candidate Joe Biden's supporters will do so early by mail, a ...

Putin, the poisoning and Belarus: what's really going on?

Vladimir Putin has been rattled by protests in Belarus and Russia’s far east - and stands accused of poisoning Alexei Navalny, his only real political rival at home. What does P...

The Chief Medical Officer, Dr John Lee, reports 385 COVID-19 tests have been carried out since it was last reported yesterday. One positive case was detected.

The Minister for Finance and Economic Development, the Hon. Roy McTaggart is pleased to confirm that the Government of the Cayman Islands has awarded the provision of a stand-by...

Downloads of Chinese applications TikTok and WeChat will be banned in the United States as of Sunday, the Commerce Department reported Friday, citing threats to "national securi...

US President Donald Trump has promised to make enough Covid-19 vaccines for 330 million Americans by next April, saying the first doses will be distributed immediately after app...

Dr. Fauci: 3 everyday things you can do to help boost your immune system

There are certain practices that we know can help end the Covid-19 pandemic, like wearing a mask, washing your hands and avoiding people. And when it comes to your individual he...

DOE & volunteers work to clear sediment, Construction on Mental Health facility resumes, Another deadline to get registered coming up

The Chief Medical Officer, Dr John Lee, reports 133 COVID-19 tests have been carried out since thiswas last reported on Wednesday, 16 September. All were negative.

Trump downplays the legacy of slavery in the US

President Donald Trump on Thursday stepped up his attempts to appeal to his core white voter base, downplaying the historic legacy of slavery in the United States and denouncing...

The Chief Medical Officer, Dr John Lee, reports 140 COVID-19 tests have been carried out since thiswas last reported on Tuesday, 15 September. All were negative.

The Chief Medical Officer, Dr John Lee, reports 231 COVID-19 tests have been carried out since this was last reported on Monday, 14 September. All were negative.

3 million health workers in the world have had COVID, according to a study

Some three million health workers have been infected with COVID-19, representing 10 percent of the almost 30 million cases registered on the planet, according to a study present...

The Chief Medical Officer, Dr John Lee, reports 333 COVID-19 tests have been carried out since thiswas last reported on Friday, 11 September. All were negative.

Israeli Prime Minister Benjamin Netanyahu announced on Sunday a new national quarantine due to a persistent increase in coronavirus cases, in which schools will close and some e...

The Chief Medical Officer, Dr John Lee, reports 105 COVID-19 tests have been carried out since thiswas last reported on Thursday, 10 September. All were negative.

The next deadline to register to vote in the Cayman Islands is Thursday, 1 October 2020. Those who register by this date will be added to the Register of Electors and be able to...